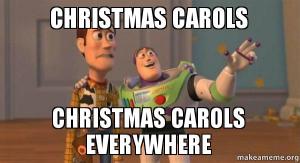 The radios are completely in the Christmas swing. There is no avoiding the Christmas madness. Yet, not all of those songs are Christmas songs. Where does “Walking in a Winter Wonderland” go? Technically, there is nothing in the song about Christmas. There is dreaming by the fire, walking through the snow, and playing with a circus clown. Yet, where does it go after Christmas? It stops getting played.  I have my own list of probable reasons for this. (This excludes “My Favorite Things” which is neither a Christmas song nor winter song.)

1. The Music Industry controls the radio.

I know there is some bottom line somewhere. Someone wants to make a profit, and you cannot make a profit when in you are playing winter songs. In the new year, music companies are looking to release the first album of the year. It looks better for the artist who makes the first top 10 single of the new year. Grant it, the single will most likely be forgotten before the awards are even nominated. Yet, it looks nice for the artist for a little while. Yet, look at the profit that could be made. The artist release a Christmas album and make an album full of winter songs! This is twice the profit from one season. Also, why stop with just a Christmas album? There is at least Valentine’s Day for an album.

2. The repetition of songs would drive people crazy.

There are only so many winter songs that can be played. If the Christmas music starts on November 1, there are only so many times the radio station can play “A Marshmallow World” until someone cracks. This would call for an increase in winter songs being made. On the bright side, we can also revisit old Christmas songs. These songs are often looked over for songs which are more popular. This would be good for the mentioned above music industry. With more winter songs, there would be more potential albums for artists. Yet, we are already listening to songs on repeat for at least November and December. We could also integrate the songs about winter into the regular lineup. Also if we start playing Christmas songs later, we could stop the repetition of songs.

3. Some people do not want to be reminded that is cold outside.

I am, of course, excluding the song “Baby, It’s Cold Outside” which reminds the listener that it is cold outside. Yet, there are great summer songs, or the songs have a music video outside having fun during summer. Yet to believe that  people can have fun during winter outside Christmas, it is almost unbelievable. If we believe that Santa is on Snow Miser’s payroll, we have to believe that the Music Industry is on Heat Miser’s. Yet, there are people who do like the cold. There are winter songs which are very pleasant. Why is snow after Christmas a bad thing? Why is snow only acceptable during December? Going back to “Walking in a Winter Wonderland,” the people make a snowman and pretend to get married by it. That sounds to me more like Valentine’s Day than Christmas.

Off the top of my head, these would also be winter songs:

A Library of Literary Interestingness

Just because you CAN read Moby Dick doesn't mean you should!

pursuing a life of purpose

Worshiping...In Spirit and In Truth

Reflections of a worship arts pastor.